As we have seen in a previous post, a picture is worth a thousand words, as long as you know how to choose it. Yet, this isn’t easy. And a little postproduction may also be required. Let us see how to proceed with five simple tips.

In this process, I will also explain how you can derive inspiration from Alberto Giacometti, the celebrated Swiss sculptor. For the sake of the demonstration, I have selected a theme for this piece. It will be based on the “old man” keywords.

A simple keyword search using this combination of two small words will bring 1 683 930 different pictures. Wow! That’s a lot of different images to choose from. Skimming through the pages very quickly, I can alreadt spot a few striking photos.

Here are my tips for better results. There are not many of them, it’s very easy in fact.

1. Narrow down your search

Searching through one million pictures isn’t very convenient. I recommend you narrow down your search to a few dozens until you find the right one. To this end, you will have to add more keywords to your search.

One thing I’ve found useful over the months I’ve used JumpStory is that you can, provided you speak more than one tongue, use keywords in different languages. As it happens, the search engine will bring different results. Changing my combination of keywords to “Old Man Walking stick” will, in that instance, bring diverse and more relevant results I can work from. 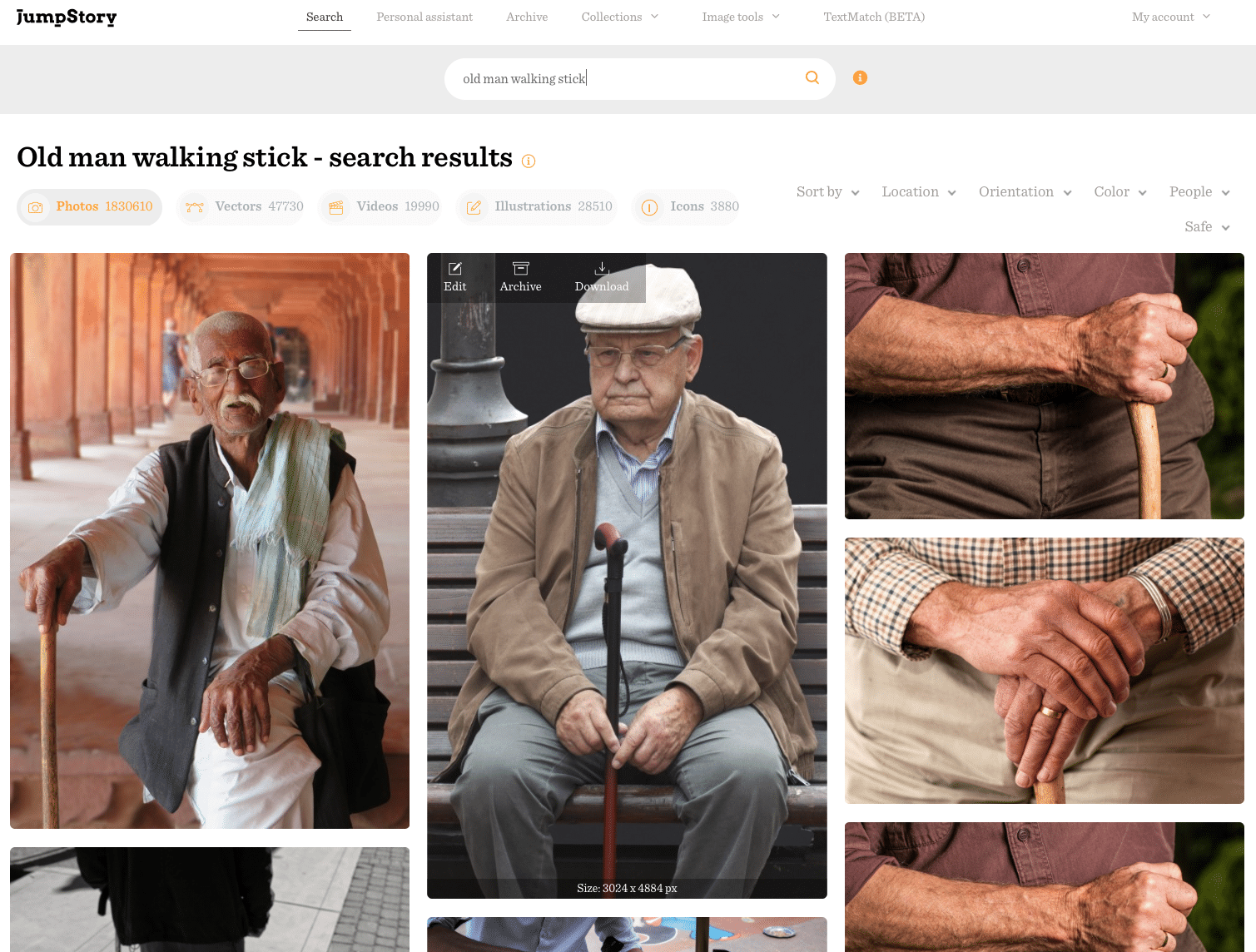 I can also improve my search using switches like the orientation parameter or the colour and black and white option etc.

One thing you should know when selecting a picture is that you might always want to tweak it. If you choose a big enough shot, it will be super easy for you to zoom in for instance and increase the impact of the image alongside your text. 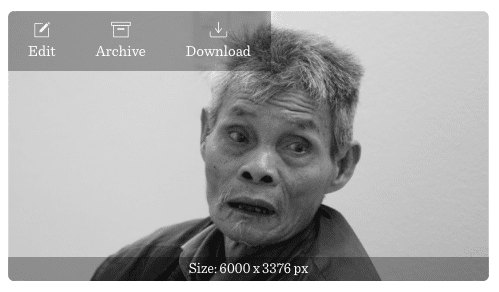 Here’s an example working from one of the above images.

This is a striking picture, but it can be improved dramatically. Here is how. Once I’ve downloaded the largest possible picture size, I’m now going to crop it to focus on the central part of the picture: the man’s eyes.

Working from a medium quality version of that picture, a zoom on the man’s eyes isn’t going to be very compelling. It will be mostly blurry and hazy.

Besides, my crop isn’t outstanding either, I’m missing some important parts of the picture like the gentleman’s teeth and moustache. Hence I will download the 6000×3376 px version and apply a manual crop to improve the shot and make it more dramatic. 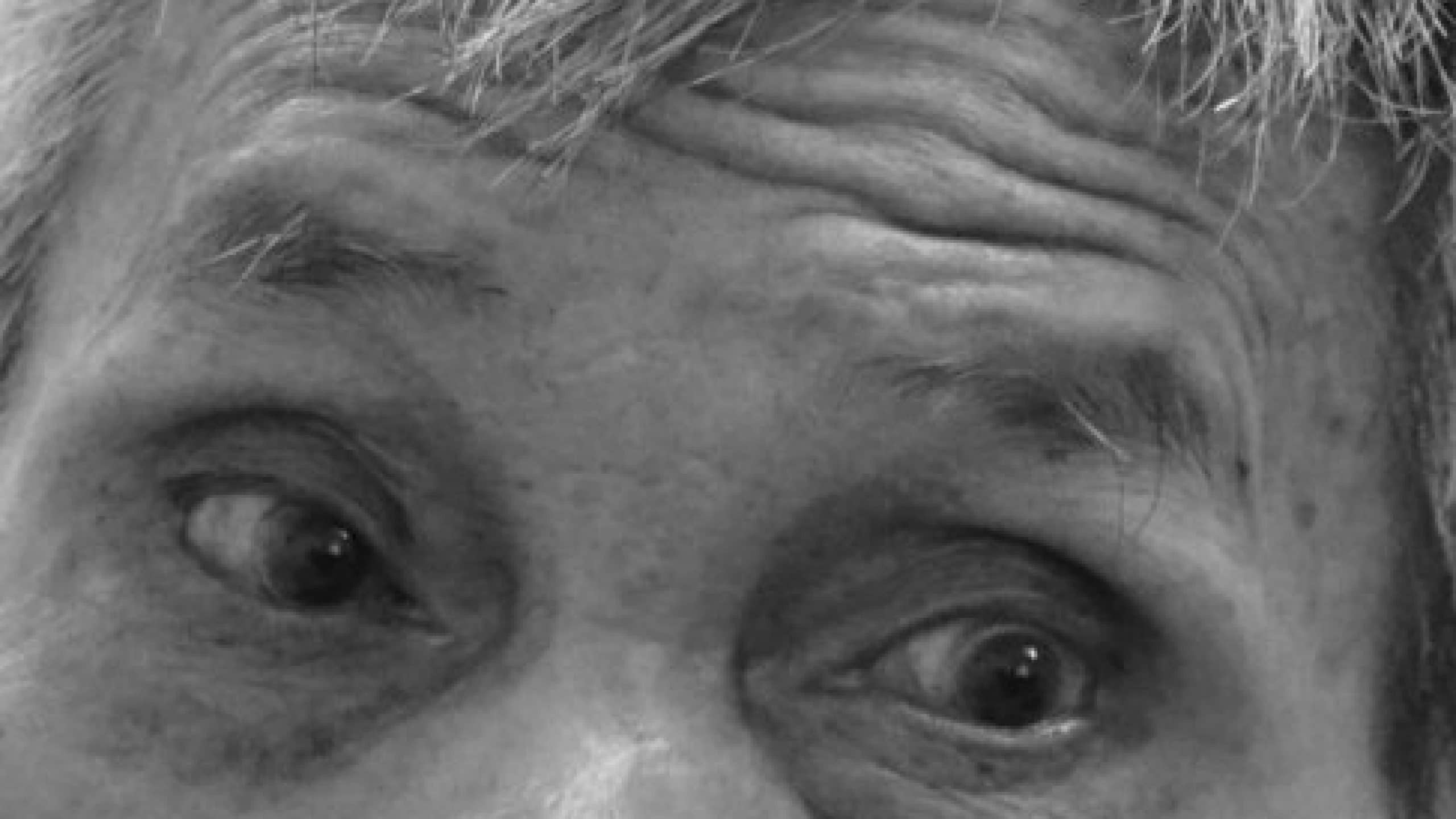 Then, I have widened my crop a little, focusing on his eyes and one can see the details much more clearly.

The squint of the left eye is spot on the third of the picture on both sides. It’s called the rule of thirds and is an almost fault-proof recipe to a classic shot. In this way, you get a fair glimpse of this gentleman’s teeth and moustache. All 3 striking elements of the picture have been highlighted.

You might also want to take a different path with this picture and use the entire shot. However, you will notice a little artefact in the background, which is slightly annoying. I will, therefore, try and remove so as to clear up the shot and make it more effective.

Doing it this way, the viewer’s eye will no longer be attracted to this tiny blurry spot on the wall.
To this end, I have used Jumpstory’s “remove background” automatic feature, and it’s done a pretty good job. Besides, it was instantaneous and required no particular editing skills.

And here’s the result with the highest resolution, later reduced to match my typical WordPress featured image size (512 x 340px).

Reducing the scale at the last minute will guarantee that your work is kept clean. If needs be, I could add a separate background. But here, I decided to leave the backdrop as is.

Sometimes, a good shot can be spoiled by its background. It’s possibly a too distinct setting in which case it can be blurred manually to help the viewer focus on the right thing. Here’s the original photo shown previously. 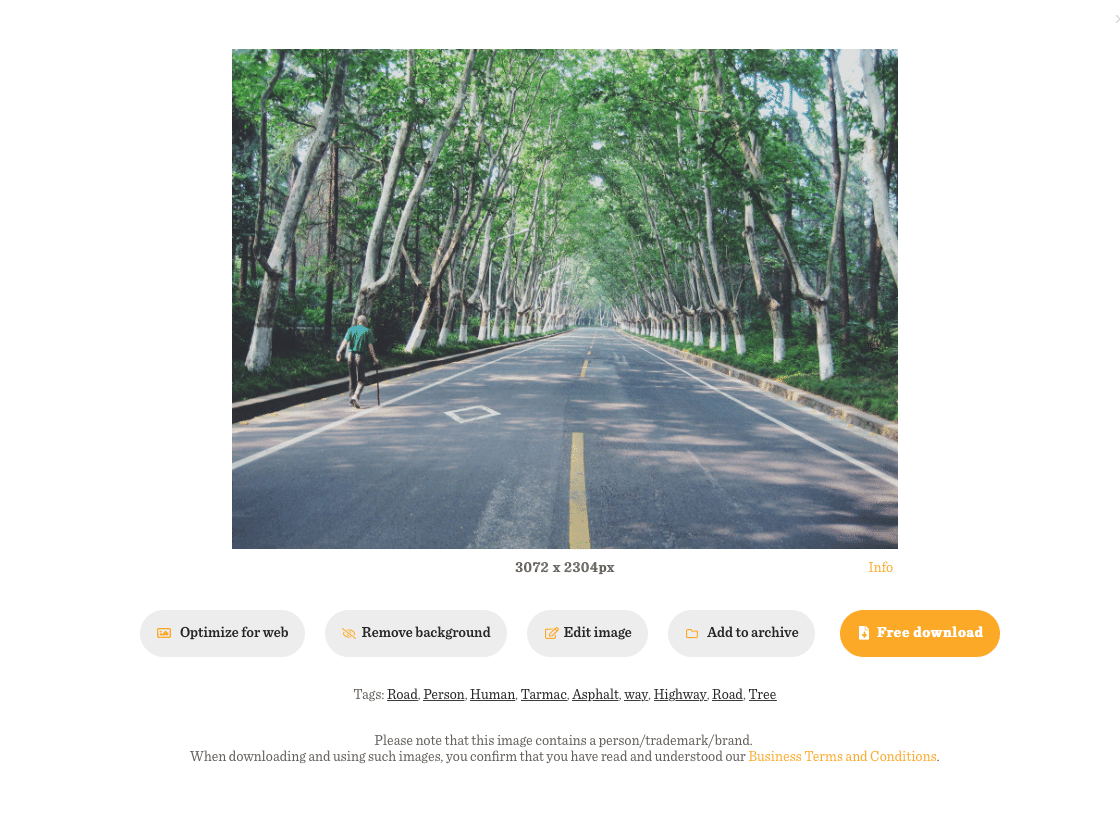 It’s a good enough shot, yet you could make it even more compelling with the blurring of the foreground and background, as mentioned in our previous blog post. This will help focus the viewer’s attention on the old man walking on the left.

In this new version of the shot I have applied a 35px tilt-shift (this is how it’s called) blurring effect at a (roughly) 20-degree angle to include the man on the left and add a left-right perspective to the picture.

Another good idea is to crop the picture slightly in order to get rid of the excess background, therefore reinforcing the sense of perspective.

One of the things I noticed on that picture too is that, even though I liked the shot a lot, I couldn’t spot the man’s shirt that quickly because it was green on a greenish background. Obviously, this is nothing the photographer could correct on the spot.

I can’t figure her or him running towards that elderly gentleman waving an orange T-shirt at him and asking him to strip on the road. Yet, this is something digital photography can do for you. Merely selecting the shirt, cutting and pasting it back as a new layer and then replacing the green colour of his shirt with any colour you like.

6. The writing on the wall

Not so long ago, post lockdown, the wife and I went to visit Alberto Giacometti’s reconstructed workshop in Paris. It’s a stunning visit, and I definitely recommend the walking men, they are really something.

Yet, what attracted my eye was that little doodle. One of the many sketches done by the sculptor and reproduced on the wall of the museum. So few lines, so few details. The drawing isn’t even finished. And yet, in a split second, you are bound to recognise the walking man theme and — even though the drawing isn’t signed — you can immediately define the sketch as being a Giacometti.

Of course, not every one of us is an artist. It takes years to develop your own style. Yet, the angle I mentioned above is also defined mostly by the picture you choose, and the style you will nurture. Start working on this, and add your personal touch.

This is what will make people read your blog and — even though they haven’t yet spotted the author’s name on top of your piece — they will know it’s you who wrote that.

This article was created by Yann Gourvennec. He has a long-standing experience in marketing, information systems and Web marketing. He created visionarymarketing.com in 1996 and since then, he has practiced Web strategy, e-business and Web communications in the field. He has been a member of socialmedia.org from 2008 till 2013 and he co-founded Media Aces, the French Association for enterprises and social media. He is a lecturer, a keynote speaker, an author and blogger. 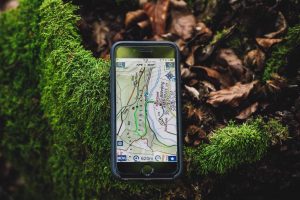 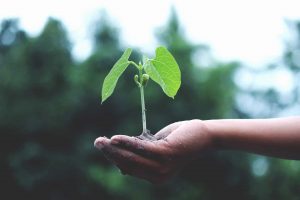 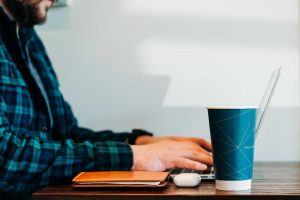 3 Ways to Improve SEO on Your Website Without Building Links